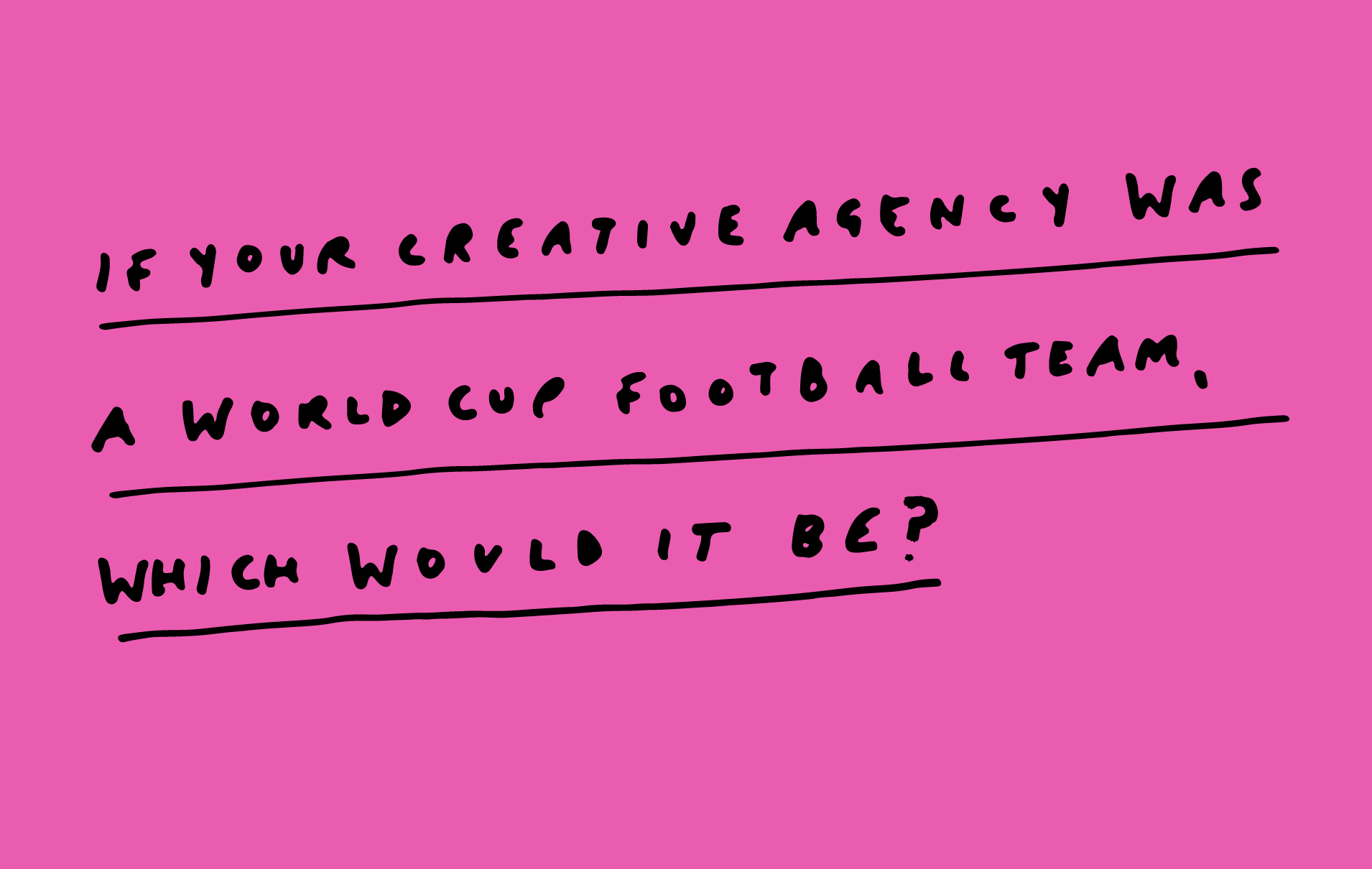 If your creative agency was a World Cup football team, which would it be?

If your creative agency was a World Cup football team, which would it be?

The argument settled as to who’d win the 2014 World Cup Final.

Germany, a model of team ethos and team spirit, coupled with a moment of sublime brilliance from Mario Götze to score the worthy winning goal.

And as Argentina’s Lionel Messi ponders what might have been, the Germans are rightly celebrating the belief that organisation is everything.

So as this World Cup winning side graduates - world champions in a triumph of German engineering - threatening to dominated the World Cup in 2018, what can we learn about how to structure a creative business from this squad, and the best World Cup teams of the past?

No team has ever captured the imagination like the Brazil side of 1970.

Turning the previous black and white world of football into glorious Technicolor.

There have been more enduringly successful teams, but none has ever dismantled the opposition in the utterly exhilarating manner in which Brazil did during the 1970 World Cup.

Pele, Jairzinho and Carlos Alberto combining to thrash home the goal that set the blueprint for all we know to be Brazilian football.

With so much talent on offer throughout the side, it was even suggested that this embarrassment of riches were too similar in style to be assembled into one team, on the same pitch.

The idea of simply playing all your best players could never work.

He went ahead and put all of his best players into a loose starting XI.

Pele and Tosado, both playing a withdrawn centre-forward role.

The lack of bodies in the box negated by the sheer attacking prowess of an entire unit.

It was pure magic despite the lack of overall shape.

But despite the absence of textbook military precision so abundant in today’s modern game, this side moved up and moved back together, as a team.

A symphony of rhythm, agility and instinct.

A marriage of teamwork and individual brilliance.

If this Brazilian side were a creative business they’d put fun at the top of their agenda.

They’d understand the power a shared culture over a ruthless system.

They’d look for sheer talent in every area.

And they’d let people go out and play.

As the shimmering gold of Brazil faded, it was clear that the future was still to be bright.

The future was orange.

With a brand of football that would become known to all as Total Football.

Unencumbered by a specific rigid formation, the Dutch system relied on wonderfully versatile players who were capable of filling in at any position the game required them to.

As a player moves out of position, he’s replaced by another from his team.

Anyone successively becoming an attacker player, a midfielder or a defender.

Fluidity reigns but the team’s organisational structure is retained.

An exhilarating wave of orange illuminated the world of football.

And although one player epitomised the Total Football ideology - able to play in almost every outfield position - Johan Cruyff was just one part of a living organism.

So the Netherlands coasted through their first and second round matches, defeating Argentina (4-0), East Germany (2-0) and Brazil (2-0) to set up a meeting with hosts West Germany.

Only to lose in the final.

But while the result is often forgotten, the ideology isn’t.

It may never have yielded a major trophy, but it did help them to reach two consecutive World Cup finals.

Having the most talented individuals doesn’t guarantee success, but sometimes we should revel in the journey not the destination.

If Holland of 1974 were a creative business, they’d place their emphasis on technically brilliant individuals with the ability to do more than their chose role.

Renaissance men and women, unhindered by job title or description.

With shared vision and discipline.

A group that collectively develops the capacity to deal with the demands of the given project.

For so long the perennial underachievers of world football, La Roja matured like a fine Rioja to produce one of the most robust systems of play to grace the world stage.

A possession-based brand of football known as Tiki-taka.

Experts in controlling a game, keeping the ball from their opponents in the manner of a cat toying with a helpless mouse.

A style of play based on making your way to the back of the net through short passing and movement, the ball worked carefully through various channels, with patience and possession above all else.

Everyone gets a touch of the ball, because everyone is capable.

The metronomic “carousel” passing of Xavi and Iniesta.

Compellingly silky with a steely defence and sublime skill (most notably when beating Italy 4-0 in the Euro 2012 final).

It was football in a completely different technical and intellectual stratosphere, reducing even the finest of competition (the Germans and Dutch) to headless chickens.

Spain had developed a footballing identity - a successful combination of Dutch ideas with a twist of their own.

They’d a national commitment to a certain idea of football.

If the Spanish team of 2008-2012 were a creative business they’d set themselves up to have shared ownership of the idea.

A systematic and patient development of a thought involving everyone.

Key players at the centre of the team, keeping up the momentum and pace, bringing others into the game, and creating option after option.

Perhaps what we can learn from the greatest international football sides is that (inevitably) any team or strategy falters over time.

When plan A doesn’t’ work, don’t resort to plan A.

Tactics have their importance, but they spring from the central thing - the idea.

Preserve the core purpose and values but change the cultural and operating practices: the specific goals and strategies.

Over-reliance upon fixed old-fashioned partnerships such as art director and copywriter need re-thinking and reinventing.

The idea of the fixed design team, or conversely the lone designer, need re-evaluation and a greater emphasis on bringing others into the process, creating greater collaboration with other disciplines.

Different partnerships like creative and planner can prove both cerebral and aesthetic pleasing.

The client isn’t the equivalent of the “bastard in the black” (football speak for the referee): they’re part of the team and should be brought into the game.

Branding and marketing is a team sport.

A combination of great team play and moments of individual genius, with an overall belief in a way of doing things.

We remind ourselves of this every day.

You tend to do that when you’re called “Squad”.

Internal vs external agencies: How should it work?

That ol' Razzle Dazzle of Different